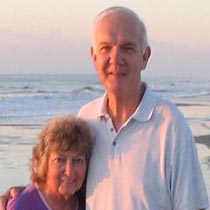 Allan A Yousten, 79, of Blacksburg, passed away Wednesday, August 24, 2016. He was born in Racine Wis. November 9, 1936 and was preceded in death by his parents, Albert and Alice Yousten of Racine; and by his wife, Anna Katherine; his son, Kenneth Andrew of Blacksburg; and many aunts and uncles in Wisconsin.

Growing up, Allan and his Olive St. friends enjoyed watching the tanks drive through town on their way to the rail station for delivery to the war, and putting pennies on railroad tracks at the end of their street. He enjoyed fishing with his dad and uncles. He graduated from Washington Park H.S. in 1954 (to whose Hall of Fame his proud mother later nominated him) and worked in the chrome-plating factory that summer so that he would appreciate being sent to college.

He received his BS degree from the University of Wisconsin, and PhD in microbiology from Cornell. He served in the United States Army, and as a research microbiologist at International Minerals & Chemical Corp. in Illinois. He joined the faculty at Virginia Tech in 1971 as Professor of Microbiology, and in 1980 received a Fulbright Fellowship for research at the Pasteur Institute in Paris. He conducted research as a visiting professor at Arizona State University and at Heriot-Watt University in Edinburgh, UK. During his career in research on the use of Bacillus thuringiensis for mosquito control, he also collaborated with colleagues in Russia and Brazil, and he was proud of his graduate students. He retired from Virginia Tech in 2001.

Allan was a gentle soul who loved his family, animals included (in spite of allergies). He taught his children to camp when traveling, and to enjoy baseball, bratwurst, and playing in the microbiology lab. He enjoyed watching the backyard wildlife, even when they were eating his garden. He was blessed with more loving family when he married Ann, whose care and children have so enriched our lives. He enjoyed reconnecting with distant cousins in Belgium and Switzerland. In retirement, he participated in a local bowling league, lunched with his former colleagues and bowling friends, and, with his beloved wife Ann as guide, was an active gardener, also enjoying the energy that Ann’s friends brought into their lives.

In lieu of flowers, memorial contributions may be made to the Humane Society of Montgomery County, P.O. Box 287, Blacksburg VA 24063, or to the National Ataxia Foundation, 2600 Fernbrook Ln, Ste 119, Minneapolis, MN, 55447, or to a Humane Society in your community. Arrangements by McCoy Funeral Home, Blacksburg.