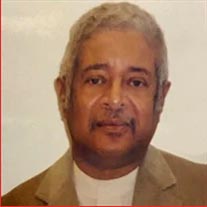 He was affectionately known as “Lee” to his family and friends. Sherman received his education in the Virginia Public School System, he played the clarinet at Christiansburg Industrial Institute, where he graduated in 1957.

Sherman moved to Washington DC in 1957, where he briefly stayed with his Aunt Sis (Marie) and her daughter Denise. He joined the U.S. Armed Forces (Air Force) in 1960 as was honorably discharged in 1966. He held several positions throughout his career: the U.S. Postal Service, Federal Bureau of Investigation (Fingerprint Technician), Small Business Administration (Accountant) where he worked for twenty plus years until he retired.

He was a member of Allen A.M.E. Church for over thirty years, where he organized the Condolences Choir. He also attended Pilgrim A.M.E. Church where he served as the Assistant Minister of Music and played the piano each Sunday. He was faithful to both Allen A.M.E. and Pilgrim A.M.E. Sherman loved music. He learned to play the organ and piano and brought boundless joy to him. He was invited to play the piano at St. Paul A.M.E. whenever he visited his hometown. Although his health declined, he never let it stop him from coming to church and worshipping with his church family. He loved his church family and much as he loved music and now he is playing for the angels.
Sherman was extremely social. He was an avid traveler, as he visited many states and cities across the United States, as well as several continents (Africa, Asia, Australia, and Europe) while traveling with the members of the gospel choir, and close friends Bobby and Christine. He also loved cruising where he visited many of the islands in the Caribbean. He enjoyed watching basketball and football on television.

The family will receive friends will be held Wednesday, June 15, 2022 from 11:00 am until service time. Funeral services will be held Wednesday, June 15, 2022 at 12:00 noon in the McCoy Funeral Home Chapel with Rev. Archie Richmond, Presiding Elder Emeritus officiating. Military graveside service will follow Wednesday at 2:00 pm at Southwest Virginia Veterans Cemetery, Dublin.