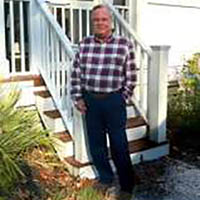 Philip was a 1976 graduate of Radford High School and a Veteran of the United States Navy. He received his Bachelors Degree in Manual Arts Therapy from East Tennessee State University. Through his work at the VA, serving his fellow veterans he received the honorary distinction of being appointed Kentucky Colonel by the Governor of KY.

After retiring from the Veterans Administration, Philip spent his time enjoying the outdoors. He was an avid outdoorsman who spent much of his time enjoying the beauty of Giles County which he called home. Anyone who knew Phillip knew that he was the most loving father a daughter could ask for.

Philip is predeceased by his parents, Herman and Hazel Young.

He is survived by his daughter, Samantha Peters and husband Daniel of Mount Pleasant, SC, his brother, David Young of Alpharetta, GA and his children, Megan, Brad and Madison, his sister and brother -in-law, Rebecca and Barry Moore of Radford, VA.

Due to COVID-19 regulations a celebration of life will be scheduled for a later date.

The family would like to thank all of Philip’s friends and extended family for their love and support during this difficult time.

If you wish to remember Philip in a special way the family requests donations be made to a charity of your choice.

Kendall Funeral Home in Pembroke, VA are in charge of arrangements. Online condolences and distant hugs may be sent by visiting kendallfuneralhome.com