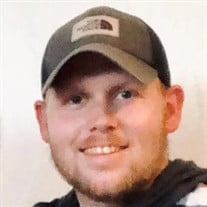 James Brittan Young, age 30 of Christiansburg, passed away on July 21, 2021. He was preceded in death by his grandmother, Imogene Thompson; grandparents, James Ray and Lois Jean Young; and uncle, Rob Sowell, Jr.

He is survived by his parents, James Ray Young II and Bridgette Annette Young-Glass; His loving soulmate, Rachel Rutledge and his greatest blessing, a son, coming this January; grandparents, Rob and Tricia Sowell, Danny and Veronica Hanks; grandfather, Kenneth Thompson, as well as his fur babies, Cora Bear and Jade. He is survived by many other loving family members that include nieces, nephews, aunts and uncles.

James was a 2008 graduate of Christiansburg High School. He also attended New River Community College in 2009 and WYO Technical Institute in 2012 where he received his welding certificate. He will be remembered for many things especially his exceptional soccer ability.

Visitation will be held Sunday, July 25th at 5:00pm at the Christian Growth Center, Christiansburg VA. A memorial service will follow.