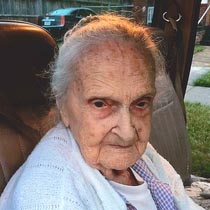 Elrica was born in Barcelona, Spain on June 2, 1914. She was the last of a family of fifty-two first cousins. Her parents later moved to Havana, Cuba where as a young girl she learned to speak fluent Spanish before English. They later moved to the Baltimore, Maryland area and then to Pennington Gap, Virginia before returning to the Radford area. Her father was from Montgomery County, Virginia and her mother from Cambridge, England.

She was a 1933 graduate of Radford High School and attended Radford College. Elrica joined the Radford Presbyterian Church on December 25, 1932 making her the oldest member of the church not only in age but in years of her service. She was made an honorary life member of the Presbyterian Women on June 7, 1989. She was past regent of the General William Campbell Chapter of the Daughters of the American Revolution, having just recently received an award for being a member for 60 years, having joined on June 6, 1956. She was also a member of the Colonial Dames.

David would like to express his sincere gratitude to all the special caregivers and to the Good Samaritan Hospice for all the exceptional commitment and support that Elrica and he received over the years and at the end. He could not have done it without you.

Graveside services will be held 2 p.m. on Thursday, July 21, 2016 at West View Cemetery in Radford, Virginia. Memorial services will be held at 3 p.m. at the Presbyterian Church of Radford with Rev. David Dickerson officiating. The family will receive family and friends following the service in the church fellowship hall.

The Young family is in the care of Mullins Funeral Home and Crematory in Radford. Online condolences may be made at www.mullinsfuneralhome.com