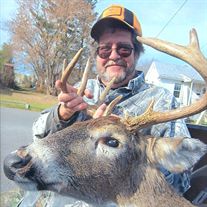 Edward Ray Young was born in Radford, VA on June 18, 1957. He was preceded in death by his loving parents, Judson & Ruth Young and his beloved canine companion, “Augustus Copper-Jake” AKA Gus.

Eddie was especially proud and had a tremendous love for all his grandchildren. Another great joy was his current canine companion, John Henry. Eddie was a lover of the outdoors and was an avid fisherman and hunter or in his words “professional buck slayer”. He was musically talented and enjoyed playing his guitar and carried on a family tradition by playing his beloved father’s autoharp. Unless he felt bad Eddie was always going full force and wide open from the minute his eyes opened until he fell asleep. He was a big jokester and loved to joke, cut up and carry on with all his family and friends bringing smiles and laughter to all who knew him. Even though he had many health issues Eddie always lived life to the fullest every day by doing what he wanted, when he wanted no matter what.