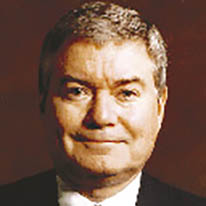 Eddie Wayne Yeatts, 59, succumbed to a lengthy and courageous battle with cancer on New Year’s Eve at his home on Claytor Lake.

Formerly of Salem, Va., and originally from Danville, Va., Eddie was retired as the Advertising Manager and Community Affairs Coordinator for Kroger Mid Atlantic Division with 33 years of service. His earliest employment included working as bag-boy at Kroger during his teen years. During his association with Kroger, Eddie was extremely involved in the community, where much of his service hours were devoted to children’s programs.

He held a leadership role in a number of area campaigns, including Muscular Dystrophy Association, United Way, March of Dimes, Juvenile Diabetes Research, Mental Health Association, American Cancer Society, hunger relief agencies and several youth programs. His many hours of volunteer work in the area earned him the Kroger Community Service Award in 2000 for exemplifying the spirit of “giving back” to the community through effective leadership and personal commitments.

During his employment at Kroger, Mr. Yeatts served on the Board of Directors for the Salem-Roanoke County Chamber of Commerce for seven years. In 1999, Eddie volunteered his time in the organization of the event that is now known as the Chamber’s “Blue Ridge Kite Festival”, which is held each April at Green Hill Park. During his tenure on the Chamber’s Board of Directors, Mr. Yeatts was a member of the executive board, member services, and worked on behalf of the golf tournament’s scholarship program. His volunteer interest with the Chamber extended into his retirement and he was awarded a lifetime membership in 2005, to recognize all of his retirement endeavors that he enjoyed as his health permitted. Mr. Yeatts continued his work on behalf of the kite festival until the time of his death.

Eddie was actively involved in the Salem Rotary Club since 1979 and in recognition of his accomplishments and endeavors he was named A Paul Harris Fellow and Skelton Fellow. He was also named a lifetime honorary member. Eddie was a major leader in obtaining sponsorships for the Old Dominion Athletic Conference Basketball Tournament: a Rotary club project each year. Through his years in Rotary Eddie worked on several committees; the latest was Chairman of Public Relations 2004-05.

Following his retirement from Kroger in 2003, Eddie also became involved with various activities around his new home of Claytor Lake. He volunteered at the Raymond Ratcliff Museum and Train Depot in Pulaski and was an active member of the British Car Club.

Eddie was a 1969 graduate of Virginia Tech, enthusiastically supported the Virginia Tech Hokies, and was a long time Golden Hokie. Eddie will be remembered for his love of his family and friends, his Alma Matter, his love of children, his admiration for trains, the tug on the end of a fishing line, his respect for the power of a strong kite on a gentle breeze, and his love of the community in which he lived and worked.

Funeral services will be held on Wednesday January 3, 2007 at 1 p.m. at the John M. Oakey & Son Funeral Home Chapel in Salem with the Rev. Dr. Robert T. Copenhaver officiating. Interment will follow at Sunset Cemetery in Christiansburg, Va. The family will receive friends on Tuesday, January 2, 2007 from 6 to 8 p.m. at the funeral home.

The family requests that in lieu of flowers that donations be made in Eddie’s name to the following charities: Carilion NRV Hospice, Muscular Dystrophy Association, United Way, March of Dimes, Juvenile Diabetes Research, Mental Health Association, or the American Cancer Society. Arrangements by John M. Oakey & Son Funeral Home, Salem. On-line condolences may be made at www.johnmoakey.com