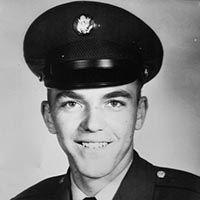 Terry Lee Worrell, formerly of Pulaski County, Va., passed away unexpectantly Saturday, April 4, at his home, in Wilkesboro, N.C., at the age of 72.

He was preceded in death by his parents, Harrison and Hazel Worrell; his siblings, Sereta Worrell Young, Helen Worrell Quesenberry, Thomas Worrell, Curtis Worrell and Gary Lawson, and his son-in-law, Jeffrey Beckner.

Terry, affectionately known as “Big Daddy,” had a larger than life personality that always made life interesting. He was a graduate of Dublin High School, Class of 1966. Following high school, he joined the United States Army, where he faithfully served his country for two years during the Vietnam War. Prior to his deployment to South Vietnam, he completed training at Fort Bragg, N.C., and Fort Knox, Ky. He served as a senior battalion clerk, a machine gunner on Ammo Convoys, and a door gunner on Huey UH-1B Helicopter. He was honorably ranked as a specialist 5th class, receiving the Vietnam Defense Ribbon, Vietnam Campaign Medal, Expert Rifleman, and Army Commendation awards.

Upon returning home, he delivered his favorite soda to everyone in town as a Coca-Cola driver before making a life-long career as a Welder at Long Air-Dox, a coal mining company in Pulaski, Va. During his career, he often made trips deep into the coal mines of West Virginia. He was a dedicated union man advocating for employee rights and serving as recording secretary for most of his career for Union OCAW 3-888.

He was a longtime member of Dublin Church of God, joining the church April 21, 1974, where he served as an usher, volunteered with Vacation Bible School, and drove the church bus — bringing children to church every Sunday. After relocating to Grahams Forge, Va., he and his wife attended Grahams Forge United Methodist Church.

Terry spent many years volunteering as a coach for Pulaski County Recreation and AAU Girls’ Basketball. He enjoyed mentoring the youth of Pulaski County.

As a young man he loved driving fast cars, racing at Elk Creek, and playing church softball. He also liked to take trips to see his brother in Nashville, and family vacations to Daytona Beach, Fla.

In retirement, he enjoyed riding his John Deere tractors in Antique Tractor Pulls, bringing back many fond memories of growing up on his family farm. He was often seen cruising around town in his red 1955 Chevy Bel-Air. He also enjoyed spending time with his grandchildren.

Terry loved God, his family, and his friends. He had a deep compassion and interest in people and was always on a mission to find out what others were up to and if all was well in their world.

Terry never met a stranger and was a proud American who fought for his country and fellow man. He was the voice you heard in the room, the 6’4 gentle giant that we all loved.

In compliance with pandemic guidelines, a Celebration of Life Service with full military rites is being scheduled for a later date. The immediate family will gather at Stevens Funeral Home for a private service officiated by the Rev. Ray Bolen of Grahams Forge United Methodist Church, Thursday, April 9, with a burial to follow at Southwest Virginia Veteran’s Cemetery in Dublin, Va.

In lieu of flowers and memorials, Terry would want you to focus on your blessings and making memories with your loved ones during this time.