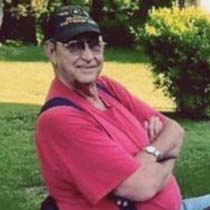 On August 13, 2016 at 9:55 a.m. our beloved husband, father, and grandpa, William Jamison (Bill) Woolwine, of Radford went peacefully to be with our Lord after a short and courageous battle with pancreatic cancer.

He retired after decades of service with the town of Blacksburg, and was a Vietnam Veteran. Upon retirement he was an avid fisherman, spending his time on the New River as much as he could. He took pride in family and cared for his disabled wife.

He is preceded in death by his parents, Jessie and Margaret Woolwine; and brother Tommy Woolwine.

The family would like to give a special thanks to the staff and nurses with Good Samaritan Hospice.

The family will receive friends on Tuesday, August 16 from 4 to 6 p.m. at Horne Funeral Home. Services will follow at 6 p.m. in the funeral home chapel with Kevin Meadows officiating. Graveside services will be private.