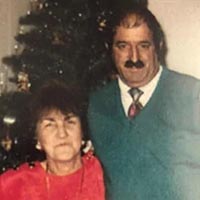 Randolph Sidney Woolwine, 82, of Christiansburg, died Wednesday, November 25, 2020. He was born in Merrimac, VA, on June 6, 1938 to the late Sidney and Bertha Linkous Woolwine. He was also preceded in death by his first wife, Carol Patricia Woolwine; his sister, Rita Kytchen, and a brother, Carlos Woolwine.

Randy was an ordained minister, and a self-employed roofer for over 55 years.