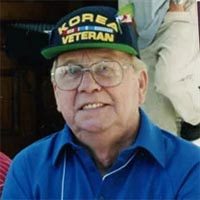 Cecil Woolwine entered into Heaven on August 2, 2019 and into the Arms of his Lord and Savior Jesus Christ. He was the youngest son of Alma and Trigg Woolwine who preceded him in death. Also he was preceded in death by his wife, Sara Altizer Woolwine; brothers, Garnet, William (Bill), Walter, and James; sisters, June Bland and Edna Cain; step-son, Philip C. Ferguson, and step great grandson, Luke Ungerer and step grandson, Joe Haga.

Cecil was a master carpenter and built many homes around Christiansburg and Silver Springs, Maryland. He was well thought of as a good Christian man who loved the Lord. He was a former member of the Star City Promaders, the Western Square Dance Club, VFW Post #5311 and Oak Grove Church. He was the kind of man who would help anyone out that he could in any way he could. He had a loving heart. He will be very much and sadly missed by his family.

Cecil served his country during the Korean War, earning the rank of Sergeant. He served in many battles and was awarded three Battle Stars and other ribbons and commendations including a Combat Infantryman Badge.