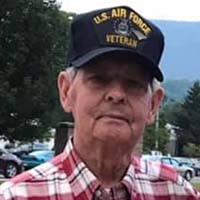 Ronald (Ronnie) Edwin Woodyard, 81 of Narrows, VA. went to be with the Lord on Monday, May 24, 2021 at his home. Ronnie was born on April 12, 1940 in Narrows and was a son of the late Clifford Johnson Woodyard and Ethel Mullins Woodyard. Besides his parents, he was preceded in death by one brother-in-law, Billy G. Rice.

Ronnie grew up in Narrows and was a 1958 graduate of Narrows High School. He joined the United States Air Force in 1958 and served with the 340th Bomb Wing of the Strategic Air Command as an aircraft mechanic. After his service in the Air Force, he went to work at the Celanese Corp in Narrows in the instrument shop and retired after 30 years. Ronnie loved spending time with his family, friends, grandkids and his pets.

Funeral services will be conducted Wednesday, May 26, 2021 at 2pm at the Givens – Riffe Funeral Chapel in Narrows with Pastor Bryan Frazier officiating with burial following in Fairview Cemetery in Narrows. The family will receive friends at the funeral chapel one hour before the service from 1 – 2pm.

Memorial donations may be made to the Giles County Animal Shelter. The family is being served by Givens – Riffe Funeral Service in Narrows, (540) 726-2442, and online at riffefuneralservice.com.