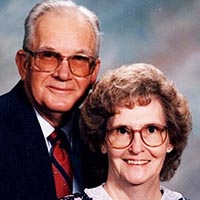 Gladys Pauline (Polly) Medley Woods, affectionately known as “Polly” to those nearest and dearest to her, passed away peacefully at her home with her husband and lifelong companion, Teddy, by her side. She was the youngest of six children of Walter Kent and Nellie Porterfield Medley.

Born February 3rd, 1933 in Rock Camp, WV where she resided for the majority of her young adult life. She was a 1952 graduate of Peterstown High School in West Virginia.

In addition to her parents, she was preceded in death by her siblings including brothers Eugene (Loretta) Medley & Leon (very close friend Eula) Medley and sisters Goldie (Tooter) Jones, and Lucille (James) Weikle. She was also preceded in death by her infant daughter Dehondra Kay Woods and her dear step-grandson Matthew “Matt” Woods, her in-laws, Frank and Nola Woods, and numerous dearly loved uncles, aunts, nieces, nephews, and cousins of both of her maternal and paternal family.

The highlight of her public life was her employment as a cashier at Ched’s Discount Store during its entire duration at both the Pearisburg and Princeton stores and her association with co-workers and customers. Following her employment and into her later days, the impact of her outgoing personality resonated when people would comment that they remembered her from Ched’s. She never forgot a name or a face, which only served to reinforce how much of a ‘people person’ she really was. Her smile and personality remained embedded in the hearts of those she befriended.

The most beautiful love and devoted wife united with her husband on March 14, 1958 and loved caring for their children. Always the loving homemaker, she was alongside Teddy in any endeavor and the two were never separated by their own making. Pauline loved to garden, can, and crack walnuts for her well known applesauce cakes, which she shared with many.

In her later years, while limited by her many physical conditions including Parkinson’s disease, failing eyesight and hearing, and an August 2018 diagnosis with stage 4 melanoma, God was so gracious to this deserving personable, caring, and affectionate person to spare her of physical pain during her illness. She received excellent care by all of the personnel at Blue Ridge Cancer Center and Lewis Gale Oncology.

The family wishes to express their forever thanks and appreciation to a very special and knowledgeable friend, Ms. Betty Stafford for her constant assistance throughout Pauline’s illness. They would also like to thank Good Samaritan Hospice for their professionalism, guidance, and commitment to personalized palliative care.

Funeral services will be conducted Wednesday, August 14, 2019 at 11am at the Givens Funeral Chapel in Pearisburg with the Rev. Lee Ellison officiating with burial following in the Birchlawn Cemetery in Pearisburg. The family will receive friends at the Givens Funeral Home Tuesday evening from 6 – 8 pm. Online condolences can be sent to the family at givensfuneralhome.com.