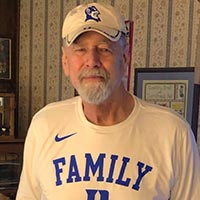 Roger Dale Wood, 73, of Narrows, VA went to be with the Lord on Thursday, January 23, 2020 at his home surrounded by his family.  Roger was born on December 10, 1946 in Maben, WV and was a devoted and loving son of Hazel Foster Wood of Pearisburg and the late John William Wood, Jr. Besides his father, he was preceded in death by his father-in-law, Millard H. Browning and mother-in-law, Etta C. Browning.

Roger was a man of many special traits. He was a loyal member of his community and an avid Greenwave supporter. He was a dedicated member of the Kiwanis Club as well as a member of the session at his church where he invested his time helping with the Children’s Home in Wytheville, VA among many other worthy activities. Many will remember him for his outstanding personality and his outlandish sense of humor – no prank was too small or too large to pass up.

His life revolved around Brenda and their family – and Erin was the light of his life. After never missing one of Erin’s sporting events or accomplishments, he and Brenda spent their time traveling around the country watching Savanna and Chandler play whatever sport was in season. Every close friend Erin, Savanna, and Chandler made along the way, instantly became part of his own family.

Among his many God-given talents, his voice was one of everyone’s favorites. He was honored to sing at multiple special occasions for friends and family members throughout his life. His two favorite sports teams that he would want remembered were Duke University Basketball and Radford University Volleyball – which made up 75 percent of his wardrobe.

He would also want mentioned his special friendships that lasted a lifetime. Friends like Bill and Lois Riddle, Mason Johnson, Brian Jenelle, Bob Frazier and Jerry Rhodes were there for him until the end. For that, he was so thankful.

Funeral services will be held Monday, January 27, 2020 at 2pm at the First Presbyterian Church in Narrows with the Rev. Dr. Fred L. Austin officiating with burial following in the Birchlawn Burial Park in Pearisburg.  The family will receive friends at the Givens-Riffe Funeral Home in Narrows Sunday evening from 6 – 8 pm.

Memorial donations may be made to the Wytheville Children’s Home, 425 Grayson Rd. Wytheville, VA 24382.