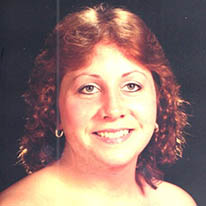 Sherry “BooBoo” Renee Ratcliffe Wolfe, age 57 of Pulaski, died Sunday, October 3, 2021 at Carilion New River Valley Medical Center. She was born in Pulaski on June 14, 1964 and was the daughter of the late Ada Pinkard Ratcliffe and Charlie Robert Ratcliffe. In addition to her parents, she was preceded in death by her husband: Charles Otis Wolfe: a daughter; Ashley Rebecca Ratcliffe: a brother; Robert Danny Ratcliffe: sisters; Linda R. Ayers and Eva Gay Dickson.

The family will receive friends on Thursday, October 7, 2021 from 12 Noon until 2:00 p.m. We will leave from the funeral home in procession arriving at 3:00 p.m., in Goshen Cemetery at Spur Branch, for a graveside service, with Pastor Randal Jones officiating.