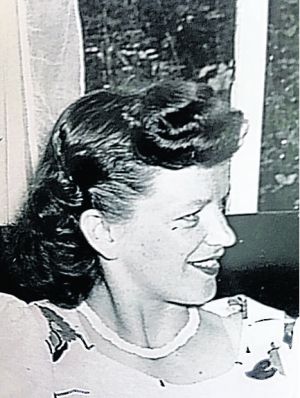 Nearly 85 years in the making, the Master Designer has deemed her mansion ready for occupancy, and in the evening hours of Monday, March 3, 2014, Audrey Reynolds Wolfe laid aside her earthly vessel to enter that city whose builder and maker is God. Born May 27, 1929, Audrey was the daughter of Bernard Fred Reynolds Sr. and Mabel Wooten Reynolds. Her Daddy took her to church at an early age at which time she accepted Jesus as her Lord and Savior and never looked back. A sister and best friend, Mary Jane Davis; and brothers, Bernard Fred Reynolds Jr. and Ray Reynolds preceded her in death. On December 28, 2012, a son, James Forrest Wolfe Sr. died unexpectedly, a loss from which she never recovered. Those left to cherish her memory are her husband of 68 years, Clarence Daniel Wolfe; sons and their wives, Don and Julie Wolfe of Newport, Va., Danny and Helen Wolfe of Pulaski, Va. and daughter-in-law, Susan Henderson Wolfe of Spencer, Va.; three grandchildren and their wives, Ben and Shana Wolfe of Christiansburg, Va., James F. Wolfe, Jr. and Genie of Camp LaJune, N.C. and Chris Wolfe of Louisville, Ky.; great-grandchildren, Caleb Forbes of Covington, Va., Kaylee and Kara Wolfe of Louisville, Ky. and Kristin, Noah, Emma and Brayden Wolfe of Stuart, Va.; sister-in-law, Beth Boyd and brother-in-law, C.E. Boyd of Pulaski, Va.; and several nieces and nephews. A celebration of life will be held on Saturday, March 8, 2014 at 11 a.m. at Max Creek Baptist Church with Pastor Mike Coleman and Dr. C.R. Conner officiating. The family will receive friends on Friday, March 7, 2014 from 6 to 8 p.m. at Stevens Funeral Home. Commital to the earth of Audrey’s earthly vessel will follow in Highland Memory Gardens, there to rest until that glorious day of Ressurection. The family gives a special thanks to friends of Max Creek Baptist Church and Family Worship Center for prayers, cards, food and visits during Audrey’s illness. Also thanks to Skilled Nursing Facility of Pulaski Community Hospital, Medi-Home Health and Hospice employees, Meredith, Sabrina, Sherry and Crystal and caretakers Zetta Arnold and Lisa Taylor who came to know and love Audrey in their short encounter with her. To know Audrey Wolfe was to love her. Arrangements by Stevens Funeral Home of Pulaski, VA.