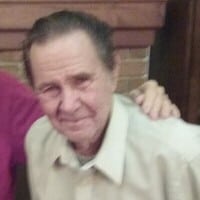 Tom’s interest in automobiles led him to a career in restoration for over 40 years. His knowledge of welding helped him when he didn’t have the right tools….he just made what he needed.

He lived in Joilet, Illinois, then Roanoke, before moving to Check, Virginia. There, he bought 3 acres of land, built an airplane hanger (for his airplane ~ yes, he was a pilot too), and constructed a house with the help of his Aunt Goldie, two brothers, and friends.

Tom’s easygoing character made him likable from the start. Many would come to ask Tom to fix this, or that on their vehicles or lawn equipment, and Tom would charge the most minimal fee. He used to say, “That’s how you get repeat customers.”

Tom lived alone most of his life. He joined Arthur Murray Studios in Roanoke, to “meet” ladies. In order to do this, he took the lessons…and found he had another passion ~ ballroom dancing.

Tom loved driving his Ford Ranger pickup truck, which HAD TO BE a manual stick on the floor!

Tom always struggled to know if there was even a “God.” In the last 7 years of his life, he found “God,” and had started reading HIS words. He became interested in knowing “where” he came from…his German and Poland ancestors. His friends (because he didn’t like computers), helped him go back three generations.

Tom is survived by his two younger brothers, Ronald L. Witska and Richard R. Witska, both of Durham, North Carolina.