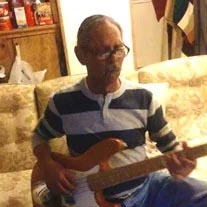 Cecil V. Witcher born in Princeton, WV on December 21, 1945. He grew up in Princeton and Tams, West Virginia, and attended Princeton High School. Cecil was employed by Virginia Tech University for many years as a cook, and also worked on the construction of the University. He was also a professional musician. He played guitar and bass guitar with his local band “The Fantastic Six”. He frequently traveled to Los Angeles California hosted by his sister Brenda Banks to work in California playing guitar. He toured briefly with the Doobie Brothers’ backup band and The Red Foxx live act in Los Angeles an Las Vegas in the early 80’s He also recorded 3 record albums.

He was preceded in death by his parents Alma Pannel and Cecil V Witcher, along with two sisters Brenda Pannell and Regelia Banks. He died on September 15th 2020 after a long illness.