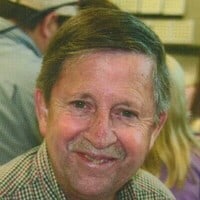 Allen Insley Wirt, 75, of Christiansburg, died peacefully Thursday morning, November 11, 2021 at Commonwealth Assisted Living in Christiansburg with his family by his side and entered into his Eternal home in Heaven. He was preceded in death by his parents, William Eugene and Minnie Era (Eanes) Wirt; and his brothers, Bobby Eugene and James Lloyd Wirt.

Allen graduated from Christiansburg High School in 1966. Upon graduation he enlisted in the Air Force and served during the Vietnam War. He was stationed at Pope AFB in Fayetteville, N.C. as a U.S. Air Force Sgt., and worked as a Jet Engine Mechanic. Allen later worked for UPS and Wolverine. He loved hunting, fishing, gardening, watching the Dallas Cowboys, woodworking, and spending time with his family and friends. His friendly, giving, loving, kind and generous personality will be deeply missed by all who knew him.

The family will receive friends from 12 p.m. until 1 p.m. on Monday, November 15, 2021 at the Mullins Funeral Home in Radford. Funeral services will begin at 1 p.m. with Pastor Kelly Howlett officiating. Interment with full military honors will follow in the Southwest Virginia Veteran’s Cemetery in Dublin.

The family would like to thank the staff at Kindred Hospice and Commonwealth Assisted Living for the care, kindness and compassion shown to Allen.

In lieu of flowers, the family requests that contributions be made to the Humane Society of Montgomery County, 1183 Flanagan Dr, Christiansburg, VA 24073.

Condolences and memories may be shared with the family at www.mullinsfuneralhome.com.

The Wirt Family is in the care of Mullins Funeral Home in Radford.