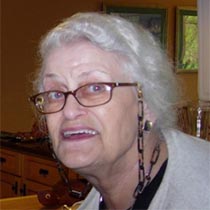 Sophia Zurel Winkel was born in Amsterdam, The Netherlands, on April 22, 1928 to Keetje (Wertheim) and Isidore Zurel. She grew up in that city, where she endured much of World War II in hiding, losing some 45 family members during that time.

She emigrated to the U.S. in 1956 with her then-husband, where her two children were born. She became a U.S. citizen in 1961. After returning to Europe for several years, she settled in Atlanta, GA in 1969, where she worked in bookkeeping in insurance and interior decorating businesses. Following retirement, she remained near her son’s family and triplet grandchildren in Atlanta, moving to Blacksburg, Va. in 2007 to be near her daughter’s family and twin grandchildren. She was predeceased by her parents and older brothers, Jacques and Wolf Zurel. Sophia Zurel Winkel passed away on June 14, 2016 at the age of 88.

The family is indebted to Drs. Gregory Beato and Jerome Goldschmidt and their wonderful staff as well as the staff at the Kroger Main Street Pharmacy for kind and expert care over the past several years, and to the remarkable medical and support staff at Lewis Gale, Heritage Hall, and Good Samaritan Hospice. Arrangements by McCoy Funeral Home, Blacksburg.