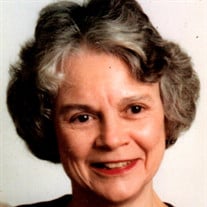 Evelyn Jacquelin “Jackie” Adamson Wingard passed away peacefully at home in McKinney, TX on June 27, 2021. One day shy of their 66th wedding anniversary, her beloved husband, Richard “Dick” M. Wingard, Sr., was by her side.

Born in Lynchburg, VA, on July 18, 1933, Jackie was the middle daughter of George Dent Adamson and Evelyn Byrd Thomasson Adamson who both preceded her in death. Having primarily grown up in the Lynchburg, VA area, Jackie’s family moved six times while her father served in the U.S. Army during World War II and they eventually moved to Blacksburg, VA where Jackie graduated from Blacksburg High School in 1951. After High School Jackie attended Mary Washington College in Fredericksburg, VA and fondly remembered living in the “practice house” while pursuing her degree in early childhood education. That experience coupled with her innate ability to organize all facets of life and the discipline to stick to a schedule prepared her to manage a busy household, family and career throughout her life. After two years at Mary Washington she moved back to Blacksburg and graduated from Virginia Polytechnic Institute and State University in 1955.

Jackie married the love of her life, Dick Wingard, on June 28, 1955, at Grace Episcopal Church in Blacksburg, VA and theirs was a love story that spanned over six decades. Always a devoted wife, Jackie happily followed Dick’s career moves to Washington, DC; El Paso, TX; Huntsville, AL; Rockville, MD; Long Meadow, MA; Cinnaminson, NJ; Knoxville, TN; Auburn, AL; Tampa, FL; and, when he retired, to McKinney, TX. Jackie said the one thing that she could always count on being the same, no matter where they lived, was her faith and being heavily involved in the Episcopal Church. She found the similarity of the services in every location to be a comfort and constant in her life which helped her acclimate and meet new friends. She also enjoyed working for many years in her chosen career field as a pre-school teacher and director both in her home and at Good Samaritan Episcopal Church in Knoxville, TN.