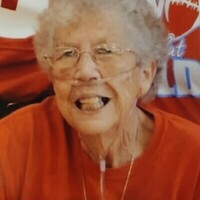 On Sunday night, Myrtle Mae Robertson Wilson went to sleep at her son, Steven Lee and Sharon Wilson’s home and woke up Monday Morning, August 29, 2022 with family and friends that long ago departed this mortal life.

85 years ago on May 12, 1937, the family of Robert Edward and Ester Lafon Robertson were blessed with a beautiful baby girl. She was welcomed by brothers, Robert Edward “Doby” Robertson and James “Bill” Robertson. This little sister was the joy of her brothers’ life. Later Barbara “Bobbie Jean” Phelps joined the family. This was a hard-working family. As Mae got older, she went to Pembroke High School. She was proud to be a Pembroke Corncutter.

In her class at school, she had her eye on a handsome football player with black curly hair by the name of Arthur Lee (AJ) Wilson. The football player had his eye on a cute, fun-loving cheerleader. On February 23, 1957, Mae and AJ were married in Pearisburg, VA by Rev. Ford. Their son Steven was the light of Mae’s life. She attended his sports games and helped him become an Eagle Scout. Steven met a lovely young widow named Sharon who brought a pretty little girl, Brittany Noel to the marriage. Then Steven and Sharon had a precious little boy, Jacoby Lee Wilson. This little boy became the pride and joy of Mae’s life. She retired from Giles County Public Schools where she worked as a Teacher Assistant in PE to take care of this sweet, smiling little boy while his parents worked.

Mae and AJ were always avid sports fans. Mae coached and kept score for the Rebelettes softball team and worked for many years at the Pembroke Concession Stand. She loved Washington Football; Atlanta Braves Baseball, VT Hokies, and her very special love for the Giles High School Spartans. Of course, Jacoby grew up attending sporting events as a spectator until he was old enough to actually play football, basketball, and baseball. Mae never missed a game whether it was home or away. She was always there cheering him on from the 40-yard line, the stands, or behind the backstop. She was his number 1 fan.

Mae was preceded in death by her parents; her brother and sister-in-law, Edward “Doby” Robertson (Peg); her sister, Barbara Phelps; her sister-in-law, Florida Robertson; and her beloved husband, A.J. Wilson. She leaves to cherish her memory, her son and daughter-in-law, Steve and Sharon Wilson of Pembroke; her grandchildren, Brittany (Derrick) Cooper of Narrows, and Jacoby Wilson of Pembroke; her great-grandchildren, Chance Gilmer and Harleigh Cooper; her brother, James Robertson of Rustburg; brother-in-law, Wayne Phelps (Nancy) of Concord, VA; several cousins, nieces, and nephews; and all of the special friends of the community that are too many to mention. The family would like to give thanks to the staff of Medi Home Health and Hospice along with special caregivers and extended family, Billy and Dorothy Williams and Reggie and Dawn Britts.

The family will receive friends Wednesday evening, August 31, 2022 from 5:00 PM until 8:00 PM at Kendall Funeral Home with funeral services on Thursday, September 1, 2022 at 1:00 PM in the Pembroke Christian Church with Pastor Gary Poff, Pastor Eddie Kendall, and Pastor Reggie Britts officiating. Burial will follow in Birchlawn Burial Park in Pearisburg, VA. In lieu of flowers, the family suggests memorial donations be made to Giles High School Athletic Fund. A guestbook is available by visiting www.kendallfuneralhome.com. The staff of Kendall Funeral Home are honored to serve the Wilson Family.