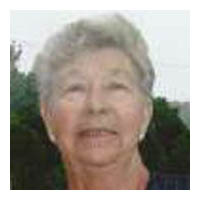 Marie Antoinette “Nettie” Wilson, 75, of Pearisburg, departed this life Thursday morning, October 22, 2015 in the care of Heritage Hall in Rich Creek. Born in Pearisburg on May 8, 1940, she was a daughter of the late Clarence and Elsie Mae Sadler Gautier.

She was also preceded in death by her beloved husband Robert Fulton Wilson and her sisters Betty Nelson, Sue Hale, Judy Smith, and Mary Adkins.

Nettie leaves to cherish her memory her devoted son Rodney F. Wilson of Pearisburg; her grandchildren Amy, Sarah, and Robert; her great-grandchildren Ivy, Jacob, Ethan, Virginia, and Andrew; her brother and sister-in-law Clarence W. “Bill” and Bonnie M. Gautier of Pembroke and her sister and brother-in-law Brenda G. and Donald Sarver of Pearisburg.

Funeral services will be conducted Sunday, October 25, 2015 at 2:00 pm in the Kendall Funeral Home, 605 Snidow St., Pembroke with burial following in Fairview Cemetery at Narrows. The family will receive friends Saturday evening from 6 until 8 pm at the funeral home. Online condolences may be sent by visiting kendallfuneralhome.com.