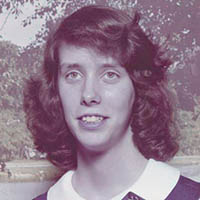 Karen Elaine Bassett Wilson, 57, of Glen Lyn, VA went to be with the Lord on Saturday, September 1, 2018 at Bland Nursing & Rehab in Bastian, VA. Karen was born on March 21, 1961 in California and was a daughter of the late Ruth Carter and raised by her aunt and uncle, Col. William D. Bassett, Jr. and his wife Florence Etta Carter Bassett.

Karen was a graduate of Princess Anne High School in VA Beach, VA, and worked in the restaurant business for several years, and she took care of her parents for 20 years. Karen greatest love was collecting Elvis Pressley memorabilia. Now Karen and Elvis have left the building.

A memorial will be held at a later date. The family is being served by Riffe – Givens Funeral Service in Narrows, (540) 726-2442, and online at riffefuneralservice.com.