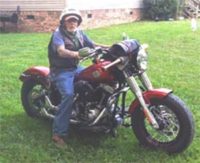 Arthur Henry “Butterboo or Homey ” Wilson Jr., 71, of Pulaski, received his heavenly wings on Sunday July 30, 2017 to forever ride peacefully in the wind with his Heavenly Father.

Henry was a proud member of the Iron Workers Local 28 of Roanoke, the Loyal Order of Moose Lodge 2087 of Pulaski and the National Rifle Association.

The family extends an invitation for all to join us in a Celebration of Life Memorial Service on Friday, August 4, 2017 @ 6:00 pm at Randolph Park Pavilion in Dublin, VA.

In lieu of flowers the family appreciates any donations to help with funeral arrangements. Please send to: Todd Wilson PO Box 2515 Pulaski, VA 24301