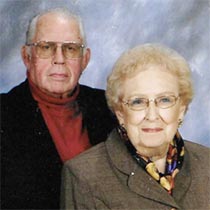 James (Jim) Franklin Wilson, aged 87, of Blacksburg, VA died on Saturday, March 21, 2020. He was born September 1, 1932 in Ceres, Virginia (Bland County), the youngest son of Dewey Kent and Annabell Barger Wilson, In addition to his parents, he was preceded in death by his wife of 59 years, Betty Greenwood Wilson, his brother S/Sgt. Owen Thomas Wilson, and brother and sister-in-law Harry Laymon Wilson and Barbara Sauls Wilson.

He is survived by his son, Thomas Greenwood Wilson of Blacksburg, VA, and daughter and son-in-law Diane Phillippi Wilson Catley (Dennis), one granddaughter, Jessica Ina Catley, and one grandson, Bryan Thomas Catley of Blacksburg.

Mr. Wilson graduated from Ceres (VA) High School and McClain’s Business College in Bluefield, WV. He was involved in business and industry for 42 years, the last 36 with the Brunswick Corporation in Marion, VA where he retired as Facilities and Maintenance Manager of the Radomes and Composites Division. His family lived in Marion until 1997, when following Betty’s retirement, they moved to Blacksburg, VA.

He was extensively active in the Evangelical Lutheran Church of America where he held many positions of leadership in local congregations of Ebenezer Lutheran Church in Marion, VA and Luther Memorial Lutheran Church in Blacksburg, VA. Positions included Sunday School Teacher, Youth Advisor, Church Council and various committees. He also served in several capacities with the Virginia Synod of the ELCA, including Synod Council, Executive Board, and numerous committees. He was involved in the construction and operation of Hungry Mother Lutheran Retreat Center for 42 years, including serving on the Executive Board, as Secretary/Treasurer, Counselor, Site Manager and maintenance operations. He attended several Churchwide Assemblies as a voting representative. In 1968 he was one of 34 ELCA members to receive the Lamb Award in recognition of his work with the church and youth.

He was a registered leader with the Boy Scouts of America for 51 years, holding leadership positions in local troops, including Scoutmaster or Assistant Scoutmaster for 15 years with Troop 92 in Marion, VA. He served District and Council positions with the Blue Ridge Mountain Council where he received the District Award of Merit and Silver Beaver in recognition of his service.

He served in other organizations, including Life Membership in Marion Lodge #32, Ancient Free and Accepted Masons and Marion Royal Arch Chapter #54, where he served as High Priest, District Deputy Grand High Priest, as well as Secretary/Treasurer for several years. He served with the U.S. Army Signal Corps in Korea during the Korean War and was a life member of VFW Post #4667 in Marion. He organized and served on the Endowment Committee of the Ceres High School Alumni Association, and was a member of the Hokie Club, the local RSVP volunteer service organization in Blacksburg and a volunteer at Montgomery Regional Hospital.

Active in historical and family genealogy research, he was a life member of the Wythe and Bland County Historical Societies, a member of the First Families of Wythe County, and Sons of Confederate Veterans. In 2004 he edited and published a book of his Great Grandfather’s family letters from the Civil War.

A memorial service and celebration will be held at a later date.