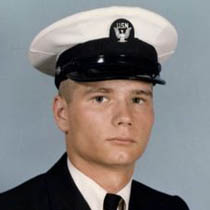 Eric Parker Wilson, 61, of Christiansburg, and Roanoke, passed away on Wednesday, March 23, 2016. Eric was a 1972 graduate of Christiansburg High School and a veteran of the United States Navy.

There will be no public visitation or service. In lieu of flowers, donations can be made to the VA Hospital in Salem. Condolences may be made through McCoy Funeral Home. A private burial service for the family will be held at a later time.