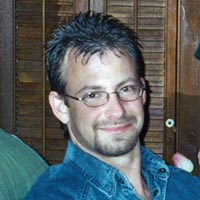 Christopher was a graduate of the 1992 Narrows High School Class. He worked construction with his father at Wilson Construction. Music and motorcycles were his passion, as he loved playing his guitar, singing, and riding his Harley Davidson. His favorite place to be was Myrtle Beach, where he spent his days hunting shark teeth.

In addition to his parents, survivors include two daughters, Harley Paige Wilson and companion Matthew Romanello of Peterstown, WV, and Olivia Alexandra Wilson of Rich Creek, VA; one grandchild, Halle Teagan Romanello; and many beloved friends. As an avid animal lover, he also leaves behind his three dogs, Miya, Magic, and Jack.

Funeral services will be held at 7:00 PM on Tuesday, September 1, 2020, at the Broyles-Shrewsbury Funeral Home Chapel in Peterstown, WV, with Scott Spangler officiating. Visitation will be from 5:00 PM until time of services at the funeral home. Online guestbook can be signed or condolences may be sent to the funeral home at www.broyles-shrewsbury.com. Arrangements by Broyles-Shrewsbury Funeral Home, Peterstown, WV.