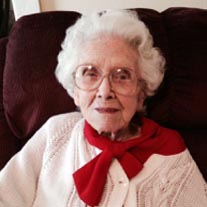 Alma Inez Wilson, age 98, formerly of Blacksburg, died February 2, 2016 in Richmond, Virginia. She was born in Athens, Alabama on April 5, 1917 to the late William and Mary Estep Brackeen. She was also preceded in death by her husband, Coyt T. Wilson.

Survivors include a daughter, Patricia Button; a son, Wade Wilson; son-in-law, Gilbert Button; grandson, Mark Button; granddaughter, Charlotte Dublin and her husband, Bryce; great grandchildren Paxton, Joshua and Taylor Dublin; and a number of nieces and nephews. She was a beloved Mother, Grandmother, Aunt and Friend.

A Memorial Service will be conducted on February 8, 2016 at 11:00 am at the Three Chopt Church of Christ in Richmond, Virginia. On Tuesday, February 9, 2016 at 10:00 am the family will receive friends at the McCoy Funeral Home in Blacksburg, Virginia. A graveside service will follow at 11:00 am in Westview Cemetery.

In lieu of flowers, memorial contributions may be made to the Blacksburg Church of Christ or Three Chopt Church of Christ, Richmond, Virginia. We wish to express our appreciation to the wonderful caregivers and staff at Commonwealth Assisted Living at the West End for the love and care that they provided.