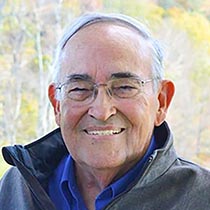 William (Bill) Elmo Willis, 79, of Radford passed away peacefully at his home on Tuesday, June 21, 2016 surrounded by his family after a courageous battle with cancer. He was retired from the City of Radford and a veteran of the U.S. Army.

He studied electrical engineering at Virginia Tech, and he then worked for the City of Radford for 46 years, most of those as Director of Electrical Utilities. He was a long-time member and past president of the Municipal Electric Power Association of Virginia, Radford Host Lions Club, and Little Meadow Hunt Club.

It was often observed that Bill was a man of few words, but when he talked, people stopped to listen. He enjoyed nothing more than being with his grandchildren and spending time in the mountains of Virginia.

He was born September 24, 1936, in Floyd County, Va., to the late William R. and Nettie S. Willis. He was preceded in death by his parents; sisters, Nancy Mahloy and Lori Thorsen; and his brother, Calvin Willis.

He is survived by his wife of 48 years, Judy; daughter and son-in-law, Becky and Mike Dangerfield; grandchildren, Austin and Abby, all of Radford; and sisters, Odell Quesenberry, Avis Effinger, and Kathleen Davi. He also leaves behind many other relatives and friends.

Visitation will be held from 10 a.m. until 12 Noon on Friday, June 24, 2016 at Central United Methodist Church in Radford. Memorial services will begin at 12 Noon with Rev. Dale Gilbert and Rev. Don Shelor officiating. Interment with full military honors will follow at the Southwest Virginia Veterans Cemetery in Dublin, Va.

In lieu of flowers, please consider a donation to the Central United Methodist Church Building Fund, 803 Wadsworth Street, Radford, VA, 24141.
The Willis family is in the care of Mullins Funeral Home and Crematory in Radford. www.mullinsfuneralhome.com