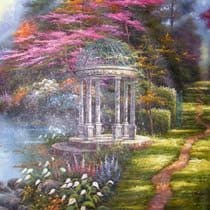 Pauline Bemis Williamson (Polly) of Blacksburg died on June 15, 2016 at the Kroontje Center in Warm Hearth Village, Blacksburg. She was born in Ankeny, Iowa in 1918, the daughter of Paul and Beulah Bemis. In the early 1940’s she moved to Washington D.C. to pursue a career as a legal secretary. In 1945, Polly became a court reporter for the World War II war crime trials in Dachau, Germany. It was here she met her future husband, K.C. Williamson. They were married in December of 1946. In 1952, Polly and K.C. moved to Blacksburg. She was preceded by her husband, her sister, Marion Bemis and her daughter-in-law, Wanda H. Williamson. She is survived by her daughter, Margaret of Rock Hill, S.C., son, Chris of Colonial Heights, Va., grandsons, Jason (Susan) of Midlothian, Va., Brandon (Kristin) of Chesterfield, Va., 3 great-grandchildren, Kaylee, Cole and Kameron. We would like to thank the staff and administration of the Willows in the Kroontje Health Care Center at Warm Hearth Village for their exemplary care of Polly for the last 5 years. Graveside services will be held Saturday, June 18, 2016 at 2:00 pm in the Westview Cemetery with the Rev. Kelly Shushok officiating. In lieu of flowers memorial contributions may be made to Warm Hearth Foundation 2387 Warm Hearth Drive, Blacksburg, Va. 24060 The family will receive friends from 1-1:45 pm Saturday afternoon prior to the service at the McCoy Funeral Home, 150 Country Club Dr. SW, Blacksburg.