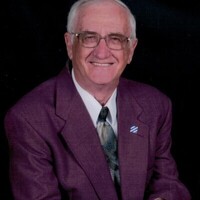 William E Williams known to many as Little Bill or Uncle Bill claimed the promise of the resurrection on May 26th surrounded by his family. Just short of his 92nd birthday, Bill was beloved in his community for his generosity, hospitality, kindness toward many and his patriotism.

He did not know a stranger and knew the names of most in this small community having run two grocery stores for 60 years, a butcher shop, and having served as a U.S. Mail Carrier for over 30 years. In his spare time, he also loved to farm and best loved to raise chickens. He was legendary for his cooking skills particularly pecan pies, homemade yeast rolls, and chicken and dumplings and so much more. Many a person benefited from his ability to cook including hungry county workers, children who were unable to get food at home, folks playing in golf tournaments, folks frequently local fundraisers and those who were less fortunate and needed a hand up with groceries. He was member of the Pembroke United Methodist Charge, the Masons, the Shriners (Jingles the Clown), American Legion, and the Ruritan Club. Bill was a character to say the least and enjoyed dressing up for Halloween, being a clown for the Shriners and most of all dancing with Mary his wife.

In honoring Bill and in lieu of flowers bring a couple of dollars for the offering plate at the visitation or service. Bill always had a dollar or two in his pocket to give his grandchildren or to help a friend in need. All donations will be divided among local charities as would be his wishes.

On behalf of the family, we would like to thank our many friends and family who have supported us in this difficult time. Thanks also to Dr. Carol Ballard of Medical Associates of Blacksburg for her long- time love and care, for Carillion Hospice of the New River Valley, and for caregivers Frances Mullins and Donna Price.