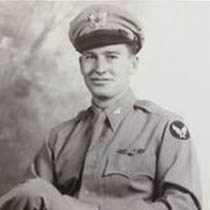 George Robertson Williams Sr., of Blacksburg, passed away peacefully with his family by his side on March 7, 2016 in Christiansburg, at the age of 96. The family would like to thank the staff at Commonwealth of Virginia (Wheatland) and Good Samaritan Hospice for their special care and love for George.

George was born on December 20, 1919 in Comanche County, Texas to CB and Yetta Sharp Williams. He graduated from Comanche High School in 1938. He enrolled in Texas A&M in the fall of 1938. George joined the Army Air Core in October of 1942. He piloted a B-24 J Liberator and flew 25 combat missions in Italy during World War II. He remained in the service and served in the Army Reserve and retired as a Lt. Colonel.

He graduated from Texas A&M in June of 1947 with a BS in Horticulture. He completed his graduate work at Virginia Tech in 1951 and was awarded the outstanding graduate student. George worked for Virginia Tech for over 30 year as a Professor of Horticulture. Following retirement he worked in Antalya, Turkey for the World Bank doing research projects for the Turkish government.George served as a deacon, Sunday school teacher and choir member at Blacksburg Baptist Church.