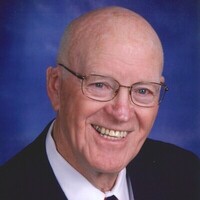 George Abraham Williams, Sr., 90 of Radford passed into eternity June 6, 2020. George served in the U. S. Army in Germany during the Korean conflict, then honorably discharged in 1952. He married his beloved wife, Gilda Beamer Williams in 1953 and they were happily married for 54 years until her passing in December 2007.

He was the son of Samuel E. and Mattie Cowan Williams and grew up in Lebanon, Virginia. He never lost his love for his homeplace and family farm in Russell County, and always looked forward to going back for the annual Williams Family Reunion. He was predeceased by 11 brothers and sisters, and their spouses.

In the 1960’s, and the following three decades, George served as a Scoutmaster in Fairlawn, mentoring 5 young men who became Eagle Scouts. He was President of the Fairlawn Lions Club, President of the Belle Heth PTA, and served in many local, regional and statewide leadership positions in the Christian Church Disciples of Christ. He was employed at Hercules in the stores department until he retired in 1989. George was a 60 year Mason and member of VA May Lodge #38 AF&AM, and a member of Scottish Rite and Kazim Shrine Temple.

He was so happy to have his children and all four of his grandsons living in Radford where they could enjoy a close family relationship and attend church together for many years. He was a member of Calvary Baptist Church in Radford where he served as a deacon and trustee.

The family would like to thank special friend, Etta Collins, for spending many hours of companionship with George, his many church friends and those he socialized with at McDonalds over morning coffee.

In lieu of flowers, donations may be made to the Williams Family Endowed Scholarship Fund at Calvary Baptist Church, 624 Sixth Street Radford, VA 24141.

The family will receive friends from 10 until 11 a.m. on Tuesday, June 9, 2020 at the Mullins Funeral Home in Radford. Funeral services will begin at 11 a.m. with Pastor Timothy Worles officiating. Interment with full military rites will follow in Highland Memory Gardens in Dublin.

The Williams family is in the care of Mullins Funeral Home & Crematory in Radford, Virginia. www.mullinsfuneralhome.com