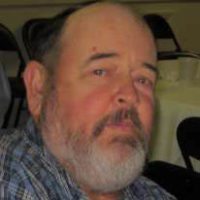 Michael Allen Williams, 64, of Big Branch Hollow, Pembroke, VA, departed this life Thursday morning, August 14, 2014 at Crilion Roanoke Memorial Hospital in Roanoke. Born in Pearisburg on October 26, 1949 he was a son of the late Alvin M. and Betty Jean Williams.

Mike had been employed at the Lynchburg Foundry and later a trucking operator. He was a member of Castle Rock Baptist Church in Pembroke.

He leaves to cherish his memory his devoted wife of 44 yrs. Anna Lee Cox Williams; his sons and daughters-in-law Mickey and Suzanne Williams of Pembroke, Eddie and Heather Williams of Pembroke; his grandchildren Janna Williams, Jonah Williams, and Hunter Smith; his brother and sister-in-law Barry and Wanda Williams of Trigg; his sister Sharon Kirby of Knoxville, TN; his several nieces and nephews; and a special young man in his life Brett Whitlow.

Funeral services will be conducted Tuesday at 11:00 am in Castle Rock Baptist Church in Pembroke with Pastor Gary Poff and Pastor Shahn Wilburn officiating. Entombment will follow in Birchlawn Abbey in Pearisburg. The family will receive friends at the church Monday evening from 6 until 8 pm. The Kendall Funeral Home in Pembroke is in charge of the arrangements. Online condolences may be sent by visiting kendallfuneralhome.com.