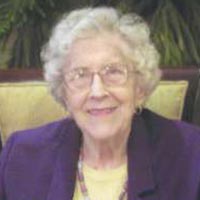 Louise Clark Smith Williams, 95, formerly of Pearisburg, VA, departed this life to enter her Heavenly Home to be with her Lord, Saturday evening, April 25, 2020 in the care of Kroontje Health Care and Good Samaritan Hospice in Blacksburg, VA. Born June 18, 1924, in Round Bottom, VA, she was the daughter of the late Luther and Ethel Day Clark.

Louise was a proud graduate of Columbia Bible College graduating with a Bachelors Degree in Christian Education. She was able to fulfill her calling in Christian Service, through being a Christian Education Minister and Secretary at Pearisburg First United Methodist Church. For over 30 years, she attended Riverview Baptist Church, having served two terms as the President of the Ladies Fellowship and many years on the Missions Committee where she was chair for eight years. Louise also enjoyed her time gardening, and found her greatest joy was being a grandma to her most treasured grandbabies.

She is preceded in death by her parents; her first husband and love, Charles Smith; a second husband and chance of love, Alvin Williams; her beloved son, Todd Smith; and brothers, Randall Clark, and Ralph Clark.

There will be a graveside service, Tuesday, April 28, 2020 at Birchlawn Burial Park in Pearisburg, VA at 2:00 PM with Pastor Shahn Wilburn officiating.

The Kendall Funeral Home in Pembroke is in charge of arrangements. Online condolences and hugs may be sent by visiting, kendallfuneralhome.com.