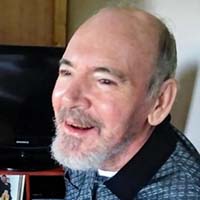 Rick was born on September 17, 1949 in Rich Creek, VA. He was preceded in death by his parents Christine (Cawley) Williams and Richard Lee (“Dick”) Williams, his sister Terri Ann Jones and brother Ronnie Cawley. There is no doubt of a glorious reunion in Heaven when Ricky arrived.

Rick was a proud father of Michelle (Cary) Nothnagel, Robin (April) Williams and Tia Williams. He had four grandsons that were his pride and joy – Truman Morris, Trenton Morris, Austin Williams and Lucas Carpenter. Rick never forgot a birthday or a holiday as a card was always sent in plenty of time for every event for his children and grandchildren.

Rick was a proud 1968 graduate of Narrows High School. In fact, one of the highlights of his life was his class reunions. He treasured those friendships. As Rick’s Parkinson’s progressed, it brought him joy and laughter to receive so many cards and messages from his classmates.

Rick attended Virginia Western Community College and obtained a degree in commercial art. He was an incredible artist as his daughter, Michelle, proudly displays his work in her home.

Rick worked for Sears and retired after many years of service. He worked various departments and ultimately excelled to management. Due to Rick’s outgoing personality, working with the public was a natural gift and something Rick truly enjoyed.

A genuine laugh and a smile that could light up a room are two traits Ricky was known for amongst friends and family. He never met a stranger and if he did, he was quick to introduce himself. Rick loved to dance, sing, play board games and spend time with family, friends and neighbors. He proudly wore his WV hat daily and was an avid fan. Rick’s larger than life personality will be missed dearly by all who knew him.

The services to celebrate Richard L. Williams, Jr. will be held at Broyles-Shrewsbury Funeral Home at 3:00 PM on Sunday, June 30, 2019. Burial will follow at Sunrise Memorial Gardens in Rich Creek, VA. Visitation will be from 2:00 PM until time of services at the funeral home. In lieu of flowers, the family asks that a donation be made to the Michael J. Fox Foundation in honor of Richard L. Williams, Jr. It was Rick’s dream that a cure for Parkinson’s be discovered. Donations can be made here www.michaeljfox.org/donate. Online guestbook can be signed or condolences may be sent to the family at www.broyles-shrewsbury.com. Arrangements by Broyles-Shrewsbury Funeral Home, Peterstown, WV.