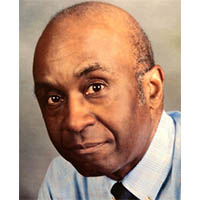 After earning his bachelor’s degree from Morgan State, Jerry was drafted into the Army and spent 3 years at Fort Meade. Upon completing his service, Jerry moved to Washington D.C. to work at the American Red Cross Research Laboratory. There he would meet and marry Juliann Williams, the love of his life, his bride of more than 50 years, and mother to his two children. With Juliann’s love and support, Jerry earned his master’s degree from Howard University and his Ph.D. at University of Maryland. In 1982 the family relocated to Blacksburg, Va., where he became a faculty member in the College of Agriculture and Life Sciences at Virginia Tech.

A standard bearer of integrity and civility, Jerry was highly respected and loved by colleagues and students alike. For the next 36 years, Jerry served as a dedicated and compassionate teacher, an advisor to more than 300 advisees, and a life coach/personal cheerleader to thousands of undergraduate and graduate students. In 2008, he received the North American Colleges and Teachers of Agriculture Teacher Fellow Award.

Rarely has anyone lived life as richly and deeply as Jerry. He spent much of his semi-retirement site-seeing across the United States and visiting family and friends. Jerry enjoyed gardening, volunteering at the local food bank, discovering new podcasts, walking his daughter’s dog, and meeting new people. Jerry truly never met a stranger.

Jerry was preceded in death by his niece Kimberly Myrick and brothers Ralph, Shannon, and Ulysses. He is survived by his wife Juliann and children, Stefan Williams, of Randolph, N.J., and Shanna Williams of Greenville, S.C. Also surviving are his sister Glenda Myrick and her family of Baltimore, M.D., and Jerry’s grandson, Lance Williams.

In lieu of flowers, donations may be made to the National Museum of African American History and Culture at https://s.si.edu/2EMxz45. A memorial will be held Friday, March 8, 2019 at 2pm at McCoy Funeral Home