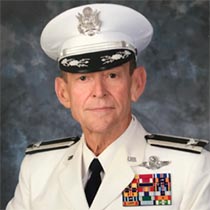 Col. Thomas Owen (T.O.) Williams III, age 80, of Blacksburg passed away on Saturday, March 10, 2018 at his home. He enjoyed a dinner with his family the previous evening before retiring.

T.O. was born July 4, 1937 to the late Thomas Owen Williams Jr. and Alice Saecker Williams in Portsmouth, VA. where he grew up being mentored by his uncles, Albert (Ab) and Wellington (Waddy) Saecker who were WWII Pilots and his Grandparents. After graduating in 1955 from Cradock High School in Portsmouth, he attended VPI where as a member of the Corps of Cadets he led the Cadet Band (Highty-Tighties) as Drum Major in 1959, his graduating year. It was during his years in Blacksburg that he met his wife of 52 years, the late Frances Shealor Williams.

T.O. served in the US Air Force as a Command Pilot, an instructor and Flight Examiner during the Vietnam War, Assistant Professor of Aerospace Studies at the Citadel in Charleston, SC., Air Command and Staff College, Montgomery Al., the Country Director for Arabian Peninsula Affairs in the Office of the Secretary of Defense, International Security Affairs at the Pentagon and the National War College in Washington, DC, National War College, Deputy Commander for operations of the 1st Special Operations Wing in Hurlburt Field, Fl., Senior US Defense Representative in Khartoun, Sudan, the Base Commander at Kelly Air Force Base in San Antonio, TX. He retired with the rank of Colonel after 27 years of service in 1986.

After retiring from the Air Force, Col. and Mrs. Williams settled back in Blacksburg where Frances had extended family and T.O. could bring his experience to the civilian world and his alma mater. He served as a Montgomery County Public Schools Director of Personnel, Director of Programs in the office of University Development at VA Tech, Associate Director for the VA Tech Alumni Association, and as Director of Development for the Virginia Tech Alumni and Conference Center Campaign, the Minnick Education Center and The German Club at Virginia Tech. T.O. served as Chairman and CEO of the Board of Directors, Virginia Tech Corp. of Cadets Alumni, 2005-2009.

His personnel life was as filled with drive and accomplishment as his professional life with an active membership and leadership roles at Luther Memorial Lutheran Church, The Blacksburg Rotary Club, The German Club, The Blacksburg Sports Club, and The United Way.

Funeral services will be held Friday, March 16, 2018 at 2:00 PM at Luther Memorial Church with the Rev. Gary Schroeder and Rev. Bill King officiating. Interment will follow in the Westview Cemetery. The family will receive friends from 6 – 8 PM Thursday at the McCoy Funeral Home. The family requests donations In lieu of flowers, gifts in T.O.’s memory can be made through the Virginia Tech Foundation with a description for the T.O. Williams Memorial Scholarship. Please make checks payable to the Virginia Tech Foundation and mail to Attn: Sandi Bliss, 902 Prices Fork Road, Blacksburg, VA 24061.Or online www.givingto.vt.edu/corps