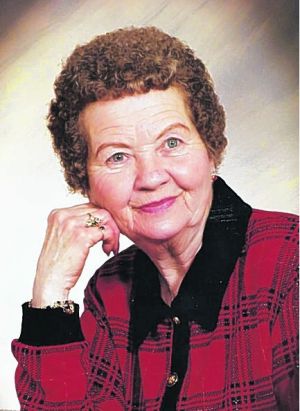 Helen Geraldine Williams, 84, of Mountain Lake Road, Newport, died Monday, February 24, 2014 at Carilion Giles Community Hospital. Born in Giles County on August 27, 1929 she was the daughter of the late Snow Meredith and Ocie Woods Meredith. She was retired from the Celanese Corporation in Narrows with over 33 years service. She was a member of the Sherry Memorial Christian Church in Newport and she loved flowers, fishing and especially hunting. In addition to her parents, she was preceded in death by her husband, Samuel Kenneth Williams; along with several brothers and sisters. Survivors include four daughters, Peggy Lois Williams, Barbara Southern and husband, Dale, both of Newport, Renee Whitt and husband, Dewey, of Glen Lyn and Trina Williams of Hillsville; three grandchildren, Robin Hypes and husband, Eddie, Debra Ramos and husband, Rod, and Kenneth Southern; great- grandchildren, Brandon, Briana, Micah, April and Russell; sister, Gladys Rock of Newport; brother, Shaggy Meredith of Christiansburg; special friends, Kristy, Carol, Christine and Pat; several nieces and nephews. Funeral services will be conducted Thursday at 1 p.m. in the Kendall Funeral Home, 605 Snidow St., Pembroke with Pastor Matthew Cox officiating. Burial will follow in Newport Cemetery at Newport. The family will receive friends at the funeral home Wednesday evening from 6 until 8 p.m. Online condolences may be sent by visiting kendallfuneralhome.com.