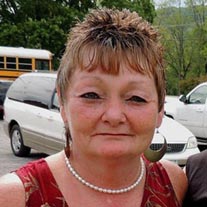 Elizabeth Ann Trout Williams, 51, of Narrows, passed away Tuesday, February 2, 2016.She was born May 10, 1964, and was the daughter of birth mother, Alice Haga, adoptive mother, Charlotte Jane Trout; and adoptive father, Billy Trout.

In addition to her parents, she was preceded in death by two uncles, Danny Blankenship and Wesley Blankenship; an aunt, Lillie Mae Blankenship Rogers; and a cousin that was like a brother, David Wayne (Milt) Blankenship.

Affectionately known as “Puddin’,” Elizabeth loved flowers and gardening. She had a huge heart and a strong work ethic, and was loved by so many in the community. Elizabeth may have told folks hard truths, but she always sent them home with food. She will be deeply missed by her family and many friends.

Funeral services will be held 2 p.m. Saturday, February 6, 2016, in the Chapel of Riffe’s Funeral Service in Narrows with Pastor Dennis Kidd officiating. Burial will follow in the Conley Cemetery in the Wolf Creek Community near Narrows. The family will receive friends at Riffe’s Funeral Chapel noon to 2 p.m. Saturday. The family requests that those sending memorial contributions please consider the Giles County Relay for Life to benefit the American Cancer Society.