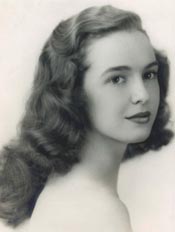 Elizabeth is survived by her devoted husband of fifty years Melburn S. Williams. She is survived by a sister Katherine Magan, nephew Robert Magan and his wife Betty, Mechanicsville. She will be missed by her friends and extended family: Dr. Richard and Lura Alice Robertson, Dr. Bill and Barbara Prillaman, and Barbara Duncan of Radford, and Ken and Jane Johnson of Farmington Hills, Michigan.

Elizabeth is a 1940 graduate of Our Lady of Nazareth High School in Roanoke and the Ruth Cornett School of Business, Roanoke. Many depended on her expertise in the Trust Department of First National Exchange Bank of Roanoke and later in the Radford City School Board Office.

Elizabeth was a long time member of Inglewood Garden Club, Chapter AB of P.E.O., Radford’s Woman’s Club, a 30 year volunteer at Radford Hospital, and a member of Phi Chi Psi. She was an avid supporter of Radford University and, along with her husband, Melburn, established the Melburn and Elizabeth Williams Scholarship in Nursing.

Elizabeth was known as a gourmet cook, accomplished seamstress, and a knowledgeable antique collector. After spending many years of retirement as “snowbirds” in Naples, Florida, she and her husband resided full time in the area they called home, the Blue Ridge Mountains of Virginia.

Visitation will be held at the Mullins Funeral Home in Radford on Thursday, May 29, 2014 from 5:00 pm until 7:00 pm. Graveside services will be held Friday, May 30, 2014 at 10:30 am at Sherwood Memorial Park, 1045 Lynchburg Turnpike, Salem, VA (540-389-1049) with the Rev. Craig Rutherford Sr. of Belmont Christian Church in Roanoke officiating. In lieu of flowers, Memorial gifts may be made to the Belmont Christian Church, 1101 Jamison Avenue SE, Roanoke, VA 24018. The Williams family is in the care of Mullins Funeral Home & Crematory in Radford. www.mullinsfuneralhome.com