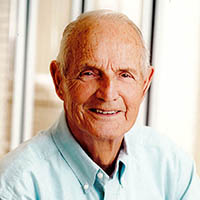 Dorman Lemuel Williams, 94, of Pulaski, VA, passed away on Wednesday, January 20, 2021, while holding the hand of his wife of 73 years, Sarah Elam Williams. Dorman was born to parents Mattie Dixon and Lemuel Williams in Cleveland County, NC in 1926.

The youngest of eight siblings, his strong senses of humor, independence, faith, and fairness were evident at a young age.  He served his country in the Navy during World War II including on Okinawa and later attended Louisburg College in NC.

Dorman spent most of his adult life in Clemmons, NC, where he retired from Piedmont Federal Bank as a Senior Vice President. He was a member of the First Baptist Church in Clemmons for 45 years where he served as a deacon. A nearly lifelong Southern Baptist, Dorman also served on the board of the Southern Baptist Convention in Nashville, TN and on the Board of Trustees at Meredith College in Raleigh, NC. Closer to home, he also served on the Winston Salem Forsyth County Planning Board, as president of the Tanglewood Golf Association, on the board of the local fire department and as an elections volunteer.

In 2007, Dorman and Sarah moved to Pulaski, VA to be closer to their family. In Pulaski, he continued his lifelong hobbies of golf, bridge, and gardening, became a member of the First United Methodist Church, and volunteered at the Lewis Gale Pulaski Hospital.

Dorman is survived by his wife Sarah, his only son and daughter-in-law Dixon and Julie Williams, and granddaughters Abby Nicolo (Jacob), Lee Williams-Ratliff (Brandon Ratliff), and Jill Williams (Michael Reis). He loved and was loved by his seven great grandchildren to whom he was affectionately known as Oompa.

Dorman will be buried at the Southwest Virginia Veterans Cemetery. Due to the pandemic, a memorial service will take place at a later time.