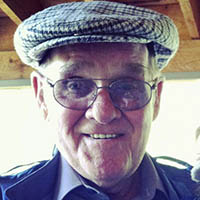 On March 18, 2021, three weeks shy of his 97th birthday, Charles Roland “Buck” Williams was called home to be with his Lord and Savior, Jesus Christ following a short illness. Born in Berton, VA on April 8, 1924, he was the son of the late Leonard Buford Williams and Naomi Mauld Staﬀord Williams.

There he grew up with four brothers and six sisters and had many tales of what it was like to grow up very poor in the 20’s and 30’s. One of our favorites was how he earned the nickname “Buck”. You see, he had raised up a little buck sheep and he would wrestle that buck sheep often until one day, that little buck sheep proved to be too much for Papaw. It was then that his dad and brothers teased him and nicknamed him “Buck” for getting the best of him.

Buck graduated from Eggleston High School in 1942 and immediately volunteered for the US Navy and Marines. He served as a medic during WWII, but the day that his ship docked in Japan, the war ended. After returning home, he began his career of 42 years with the Celanese Corporation where he met the love of his life, Dorothea Medley, happily married for 73 1/2 years and forever his soulmate. He loved farming, raising cattle, ﬁshing, and riding horses. He also loved his church and Gideon ministry. He was a very active member of Peterstown United Methodist Church serving selﬂessly for many years in many diﬀerent administrative roles. He would go around to diﬀerent churches taking the Gideon and gospel message to others and distributed thousands of bibles to churches, schools, hospitals, hotels, etc in an eﬀort to spread God’s word to the world. He was also a member of the Lindside Oddfellow Lodge.

Funeral services will be held at 2:00PM on Sunday, March 21, 2021, at the Broyles-Shrewsbury Funeral Home Chapel in Peterstown, WV, with Pastor Becky VanStavern and Jim Wentz officiating. Burial will follow at the Peterstown Cemetery in Rich Creek, VA. Visitation will be from 1:00 PM until time of services on Sunday at the funeral home.

Due to COVID-19, those attending the visitation and funeral services are strongly encouraged to wear a mask and practice social distancing. Online guestbook can be signed or condolences may be sent to the family at www.broyles-shrewsbury.com. Arrangements by Broyles-Shrewsbury Funeral Home, Peterstown, WV.