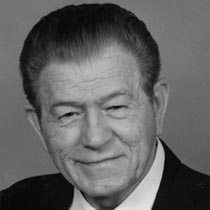 Billy Buford Williams, 89, of Christiansburg, passed away on Saturday, July 30, 2016.Billy was born April 27, 1927 in Morganton, N.C., and raised in Drexel, N.C. He was preceded in death by his wife, Ruth Stape Williams of Rushville N.Y.; his parents, Willie J. Williams and Linda Franklin Williams; and ten brothers and sisters.

Billy graduated from Drexel High School in 1945 and enlisted in the United States Marine Corps in June of that year. He was honorably discharged in August 1946. After leaving the Marines, he moved to Washington D.C. and attended the Capital Radio Engineering Institute to study electrical engineering and electronics repair. After working in several electronics-related companies in the Washington area, he obtained a position as an antenna design and testing technician at NASA’s Goddard Space Flight Center in 1968. He worked at Goddard, receiving several commendations, until his retirement in 1992.

He met his wife, Ruth, after joining the Christian Youth Crusade in Northwest Washington. They were married September 5, 1959 in Hyattsville, Md. After moving to Springfield, Va. in 1961, they joined the Bush Hill Presbyterian Church of Alexandria where they were active members for over forty years. Billy and Ruth moved to Christiansburg in November, 2005 where they became members of Wesley Memorial United Methodist Church.

Services will be held at 2 p.m. Thursday, August 4th,2016 at Wesley Memorial United Methodist Church in Christiansburg. A private inurnment at Memorial Garden of the New River Valley in Blacksburg will take place at a later date.

Donations in Billy’s honor may be made to Wesley Memorial United Methodist Church at 350 Stafford Dr, Christiansburg, VA 24073.