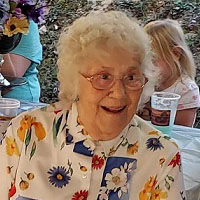 Betty Lou Hetherington Williams, 91 of Pearisburg, VA went to be with the Lord on Friday, April 30, 2021 at Carilion Giles Community Hospital in Pearisburg. Betty was born on April 5, 1930 in Trigg, VA and was a daughter of the late Earl Wright Hetherington and Lucy Shannon Stafford Hetherington.

Besides her parents, she was preceded in death by her husband of 44 years, Paul Jackson Williams, two brothers, James and Clyde Hetherington, three sisters, Mildred Simpkins, Virginia Trenar and Ruby Perdue.

Betty grew up in Trigg, VA was a 1949 graduate of Eggleston High School Eagles. She was a former member of Sheffey Memorial United Methodist Church. Betty retired in January 2020 from the Dairy Queen in Pearisburg after working nearly half a century delivering D.Q. smiles to countless D.Q. Fans.

Funeral services will be held Sunday, May 2, 2021 at the Givens Funeral Chapel in Pearisburg at 2pm with Pastor Paul Terry and Asst. Pastor Lee Martin officiating. The family will receive friends at the Givens Funeral Chapel one hour before the service from 1 – 2 pm. We will be observing COVID-19 precautions, please wear a mask and observe social distancing. Online condolences can be sent to the family at givensfuneralhome.com.