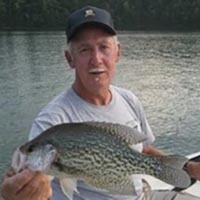 He was born January 5, 1948 in Dickenson County, VA, the son of the late Doris and June Williams. He graduated from Ervinton High School. Following high school, he enlisted in the Navy and served on the aircraft carrier USS Franklin D. Roosevelt. After his honorable discharge from the Navy, Ben and his late wife Elizabeth moved to Salem, and shortly thereafter made their home in the Copper Hill area of Floyd County where they raised their family and a large garden.

Ben was also a passionate fisherman, often spending his free time on Philpott Lake in pursuit of walleyes. He was recognized as an Expert Angler and Master Angler by the Virginia Department of Wildlife Resources and was recognized several times as the “Angler of the Month” in the Commonwealth. Always generous with his time he coached his sons in Dixie Youth and American Legion baseball, and he was a past president of the Check Ruritan Club. In retirement Ben was an avid woodworker, specializing in making tables and bowls of unique Appalachian hardwoods that he collected.

The family would like to offer special thanks to Good Samaritan Hospice of the New River Valley and their wonderful staff, including Angie Sutphin and Shannon Roop for their compassionate care over the past several weeks.

A service will be held at his home and will be limited to family and close friends.

In lieu of flowers, contributions may be made to Copper Hill Church of the Brethren Food Bank or Good Samaritan Hospice.