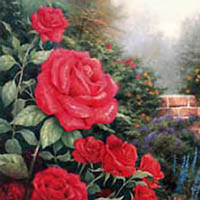 Kathryn Spencer Wilkinson, 94 of Narrows died Sunday, September 2nd, 2007 at Montgomery Regional Hospital in Blacksburg.
A lifelong resident of Giles County, she was born in the Lurich community on May 9th, 1913, and was the daughter of the late Frank Ray and Minnie Jane Cawley Spencer. She was also preceded in death by her husband, Cecil Byron Wilkinson; three sisters, Elizabeth Campbell, Hazel Mahoney, Frances Pettit; three brothers, Frank Jr., George, and Earl Spencer.

A member of First United Methodist Church in Narrows since 1924, she served as a Sunday School teacher, president of the local United Methodist Women and was as a UMW officer in the Tazewell District, a member of the Administrative Board and sang in the Chancel Choir.

She endeared herself to many people during her days of employment at the Narrows Flower and Gift Shop and the Narrows Livestock Market. The townspeople appreciated her presence on voting days as she “worked the polls.” She was also a member of the Rose Garden Club and a former Worthy Matron of Lakeland Chapter #74, Order of the Eastern Star. For the past three years, she lived at Country View Assisted Living in Peterstown, West Virginia.

The family wishes to thank her extended family at Country View Assisted Living for the loving care extended to her.

Funeral services will be held Wednesday, September 5th, 2007 at 11 AM in the Chapel of Riffe’s Funeral Service in Narrows with the Rev. Byron R. (Pete) Wilkinson and the Rev. Wayne Monroe officiating. Burial will follow in Fairview Cemetery in Narrows. The family will receive friends at Riffe?s Funeral Chapel Wednesday morning from 9 until 10:30 AM prior to the service. The family requests that those sending memorial contributions, please consider First United Methodist Church in Narrows. Online condolence messages can be sent to the family at www.riffes.com.