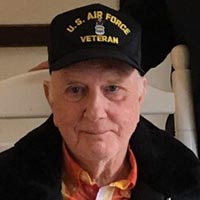 Jimmy Miller Wiley, 78 of Rich Creek, VA. went to be with the Lord on Monday, August 24, 2020 at Carilion Roanoke Memorial Hospital. Jimmy was born on June 22, 1942 in Giles County, VA and was a son of the Garland Henry Wiley and Hattie Blanche Miller Wiley. Besides his parents, he was preceded in death by one sister, Shelbie Gusler and one niece, Kim Gusler.

Jimmy was a 1960 graduate of Narrows High School and a U.S. Air Force Vietnam Era Veteran where he served as an airplane mechanic. He was a former employee of the Celanese Corp in Narrows and the Radford Arsenal. He was a Harley-Davidson motorcycle enthusiast, playing cards and being surrounded by his family.

Graveside funeral services will be held at the Southwest Virginia Veterans Cemetery in Dublin on Thursday, August 27, 2020 at 11:30am. Funeral honors will be conducted by the U.S. Air Force.