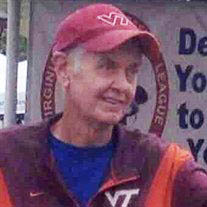 John Marvin Wilburn died February 13th, 2021 in Christiansburg, VA. He was born March 16th, 1944 in Bluefield, WV to Alder M. “Skinny” Wilburn and Allyeu McMullin Wilburn, both of whom precede him in death.

Marvin, as all knew him, graduated in the Bluefield High School class of 1962. He then lived briefly in Gainesville, FL attending the University of Florida before being drafted to serve his country honorably in the U.S. Army’s infantry from 1965-1971 including earning four Bronze Battle Stars and a Purple Heart while in Vietnam. He was a second generation Coca-Cola delivery driver and hand painted signs for local businesses before the age of vinyl, but his longest employment tenures were as a City of Bluefield, WV firefighter, cable TV installer, and mail delivery driver for Virginia Tech. He had two military Jeeps and in retirement, was best known for driving around town in his white navy-surplus CJ-5.

Family requests no home visits, but a graveside service with military honors will be held at Roselawn Cemetery in Princeton, WV on Tuesday, February 23rd, 2021 at 2:00pm.